skip to main | skip to sidebar

Last Saturday at the Dialect Day 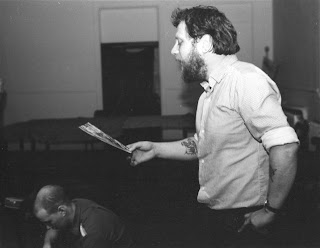 'tara, marra'
It is with great sadness that the first Tower post is to mourn the sad loss of our good friend Bill Griffiths.

9.45-am Saturday 15 September
This time Last Saturday was Dialect Day : the ’s annual contribution to Heritage Weekend. I was in the Tower waiting for Bill Griffiths to lead the event, usually he would have been here long before this time. In fact when I would arrive at 8 30am he would be waiting for me with books and placards and recording equipment, champing at the bit, and raring to go: getting all prepared for visitors many of whom would come from as far away as Ashington. This was Bill’s incredible contribution not just to the Local Community and the National Heritage but to what I now realise is becoming a whole philosophy about the English Language.

The other week he came to tea after one of his popular meetings at Gateshead Library he was really delighted with the reception of his new book Pitmatic and so we were looking forward to a terrific Dialect Day.

When he didn’t arrive till ten I was surprised but he explained that he had been waiting at the Station for a friend who was coming from London and he then spent time anxiously giving 'Steve' instructions on how to get to the Tower on his mobile phone. The tower is famously difficult to find.

By the time I came back from the Co-op with the milk, coffee and buns he had already gathered a group of people together and was hard at it listening, talking and explaining and directing friends to pamphlets.

At one point when there was a lull Bill had a little nap. That was not unusual for Bill as he drives himself so hard. It only dawned on me gradually that all was not well for as one group dispersed and another was forming he looked pretty exhausted and then began to tell me to my horror that he had discharged himself from hospital the previous week.

We decided by two that he should get a taxi back home. I said I would look after the books. The rest of the day went well according to the way he had set it up a lot of friends asked about him. His books are beautiful, the work is amazing.

I last spoke to Bill on the phone on Monday I think his friend was still with him.

You never really tell your friends how much you appreciate them but Bill like Bunting was an enormous presence in the literary revival in the North East and it will be some time before we can understand the full measure of the heritage they have bequeathed. Bill will be sorely missed.
Morden Tower 15-09-07 - post

Bill’s funeral will be on Wednesday September 26th at Sunderland Crematorium at 2 p.m.

RACHMANINOV, TEA and A ROOM FULL OF LOVED PIANOS

The first time I met Bill Griffiths it wasn’t him! I had seen the poet Bob Cooper in ‘The Frog and Nightgown’pub in Newcastle and asked him, ‘Are you Bill Griffiths?’ to which he replied, ‘no’. I was unable to hide my disappointment (sorry, Bob)
I continued not to know Bill for a few more years and now I can’t remember how we became friends but I always saw him selling his books at Durham Big meeting and always bought them. I was very much a tongue tied fan of his although he was always patient and friendly to my dumb ramblings.
He read at ‘Origins’ for me in the Bridge Hotel and came along and read on my 49th birthday in January of this year.
I lived in Seaham for a short while and he greeted my arrival with an invitation for tea. I happily accepted taking booze and books with me as gifts.
We talked of the modern poetry miasma and the poetry revival of the sixties, I told him I loved Rachmaninov, he showed me his room full of pianos, beautiful well loved pianos, he played a little, I played a little. He told me the stories of these treasures, gave me a book of his ghost stories and we shook hands and agreed to meet again soon. Happily we did at The Bolbec Hall at the launch of his Dialect Dictionary or maybe the second edition of that and at his home again where we talked lots drank tea that he made in the microwave and he rolled cigarettes and talked of his projects.
From these meetings we agreed to put out a dialect alphabet of poems , we got to ‘E’ but all the rest are still with me , he talked about his dream of Seaham museum of mining and donating all his ‘stuff’ to that.
I thought he was one of the purest poetic spirits I had ever met. Intellectual but without pretence, rebellious in the right amounts, morally absolute with regard to his principles and often to his own detriment. Forthright in his views yet not dogmatic in his definitions of poetry. Totally unaffected by his success, generous and giving to poets like me. I loved the man for all those things and was happy to be in the company of a living legend, all too briefly. The last thing Bill said to me was when I left Seaham to move to Edinburgh. ‘There go my plans to make Seaham the new capital of poetry.’ Did I tell you Bill had a great sense of humour?
Oh I will miss him; he was someone special, a great soul. An irreplaceable soul.
Kevin Cadwallender 2007-09-17 : Email 00.42


Bill Griffiths in our thoughts

I just want to add to Kevin’s fine appreciation that Bill Griffiths was in our thoughts last week when Kevin and I were meeting for a chat and cuppa on my balcony. We both exchanged fond reminiscences of Bill without realising that he was ill. Bill would have enjoyed the context of talking about poets and poetry in the autumn sunshine as the birds were diving around the sky. I would like to pay tribute to the modest scholarly man who also had the fiercest poetry passions. I visited Bill in Seaham to ask his advice about Anglo-Saxon and how it might have sounded. His translation of the Battle of Maldon is one of my treasured possessions and has been around my classes a lot and passed onto students. Bill was also a funny man with a dry sense of humour as his book of ghost stories bear witness. He was a clever critic of modern Britain. His hatred of the modern culture never let him forget to make a witty aside at its expense. One of my favourite memories is of him reading a poem at Morden Tower about visiting a supermarket. It had the same quality of burlesque as the passage from James Joyce’s Ulysses when Bloom ascends to the heavens in a chariot. I was also present when he and Barry MacSweeney read at the Voice Box in London in the years when Barry was fighting his alcohol addiction. Bill’s gentleness and care towards Barry were exemplary. When Colpitts Poetry was fighting its battle for survival, Bill was one of the many senior poets who supported our cause. We know that he bore Love and Hate on his knuckles from his biker days. What an extraordinary mixture he was of those deep passions, hating pomposity, greed and the debasement of culture, and loving his native Durham, classical music and avant-garde poetry. He kept hope alive just by living the way he did.

Posted by Morden Tower at 07:41 No comments:

Been to a Tower event post your photos here